With this much power, the Samsung Galaxy M30 will be a smartphone with a super battery and an attractive offer from this smart phone to have. Such a large battery is claimed to last up to two days.

The Samsung Galaxy M30 is equipped with a 6.4 inch Super AMOLED screen, a screen similar to the regular Galaxy M30. The M30s screen has fullHD resolution + 403 ppi and 420 nits.

Samsung Galaxy M30s will be strengthened with Exynos 9611 chipset, one level better than its predecessor, Regular M30 that uses Exynos 7904. Exynos chipset on Galaxy M30s is quite capable because the octa-core 4x 2.3 GHz Cortex-A73 CPU + 4x 1.7 GHz Cortex is paired with the Mali-G72 GPU.

With such a sophisticated processor, the Galaxy M30s is also supported by 4 GB RAM capacity with 64 GB and 128 GB storage media options.

Not only a powerful kitchen runway, Samsung Galaxy M30s are equipped with three great cameras. The configuration is the main camera as sharp as 48 MP with f / 2.0 aperture, an ultrawide camera as sharp as 8 MP with an f / 2.2 apperture, and a 5 MP depth sensor camera with an ultrawide similar apperture. Do not forget the selfie camera with 16 MP sharpness with f / 2.0 diaphragm.

An attractive offer on the latest Galaxy M is in the battery sector which reaches 6000 mAh power coupled with support for fast charging 15 watts using a USB type C port.

Unlike other Samsung phones that are equipped with NFC, Galaxy M30s are not equipped with such features but already supports Dolby Atmos, Bluetooth 5.0 and WiFi AC. 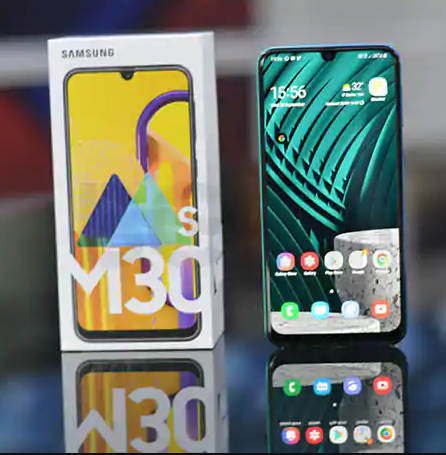